A little while ago, I saw that the Chair of the Scottish Business Network, Russell Dalgleish had posted about books that had influenced him, and asked for suggestions from others. At the time I was thinking of nominating Tom Peters who is probably the business author of choice for me. Whenever I need a bit of a challenge to my thinking or have got too comfortable, a quick burst of Mr Peters gets me back on track.

But now I have picked up a book by a historian – Peter Frankopan. It’s called “The New Silk Roads”. The subtitle is perhaps the most interesting – “The Present and Future of the World”.

I am only half-way through, but it has really made me sit up. It is fascinating, scary and inspiring all at the same time. It tells of what is happening looking East and in particular how the countries along the Silk Roads are emerging with a level of growth that should make us all take notice.

Our politicians, our media, and yes, many of our business leaders all look West – as Frankopan says: “The relentless focus on the White House, on Brexit and on the days latest breaking news in the familiar corridors of power in the West means there is limited focus on what is going on elsewhere in the world….Following the same stories and same personalities comes at the cost of being able to see the big picture”

And what a picture it is – it explains in pretty stark terms the speed at which new alliances are being formed, new initiatives started, and new projects funded. I learnt about the Belt and Road Initiative – an economic and structural initiative containing over 80 countries including the Central Asian republics, the countries of South and South East Asia, the Middle East, Turkey and Eastern Europe as well as some in Africa and possibly bizarrely, the Caribbean.

The World Bank assessed its promise for its members and concluded that it meant a 12% saving in shipping times and trade costs down by 10% on average. Just think what that means for pricing of exports from these countries. They see that the Belt and Road Initiative includes 1/3 of world trade and GDP and over 60% of the world’s population.

So now, I start to see why the US has been so aggressive in its stance. President Trump is many things, but in his heart he is a dealer, and he can see that the cards are starting to stack up. Consider this – in 2001 Chinas GDP was 39% of the US (on a purchasing power parity); that rose to 62% by 2008. By 2016 it was 114% measured on the same basis. As this trend has continued, it is easier to understand the current round of tariffs, and of carrot and stick diplomacy.

Some of the most interesting passages in the book are all about trade but not necessarily about the land-based silk roads of old. The scope of the activity covers many newer locations. The militarisation of Djibouti is a great example – 30% of all shipping traffic passes this tiny country on the way to the Red Sea. France, Japan, Turkey, and the USA all have facilities there, but when the Government decided to replace the operator of the Port it was China who were handed the keys, and they set about building a significant military base alongside the commercial Port.

“Djibouti’s proximity to restive areas in Africa and the Middle East and its relative stability have made it a prized location for foreign military bases and ensured a steady flow of foreign assistance.

Mr. Frankopan then goes on to feature the tiny West African country of Sao Tome e Principe that has been the subject of a charm offensive which ultimately led to the tiny country joining Panama and El Salvador in recognising Taiwan as a part of China. As the ‘Macauhub’ website reported in 2019:

China is a “very important partner” for São Tomé and Príncipe, particularly for “structural projects” such as the airport, new port and housing, São Tomé’s Prime Minister told Macauhub.

Jorge Bom Jesus, in an interview with Macauhub in São Tomé, backed up his statement with the fact that China is donating US$30 million to the country every year, as well as providing other occasional support, in addition to its participation in projects “which we consider to be structural.”

“China is helping us modernise the country,” the prime minister said in an interview due to be published in Macao magazine in September.

If you are wondering at the significance of this small country or you are perhaps wondering where it is. It lies on the equator and is within a region known to have significant Oil and Gas deposits – its close proximity to Nigeria and its oil infrastructure is surely relevant, as well as the huge potential of West Africa.

I was fascinated to read that Jack Ma of Alibaba fame, hosted a tour for Chinese businessmen in West Africa. The party is said to have included no less than 16 Billionaires.

So, the direction of travel is clear. An expansive China is here to stay. On the other hand, the reality of what appears to be the US focus on nationalistic isolationism should not be lost on any of us.

Mr. Frankopan is very clear though that it is not all plain sailing – many of the initiatives are yet to come to anything and the funding does seem to be very inconsistent. He also highlights the other players in this new “great game” – India and Russia, who also have their own agendas and priorities; sometimes together, sometimes apart.

As a child, you probably played this game. The idea is to try and creep up without being seen. It could easily be said that this is exactly what is happening, and that the shifting of the tectonic plates of trade is being done by stealth but the reality is I think, very different. Most people are not even looking. We are so focused on our own narrow view; here in Scotland that includes the Independence debate, on top of Brexit, on top of the climate emergency and now with the very real prospect of a massive economic shock due to Covid 19. We look on at the low standard of political debate and discourse in the US with concern, but very few will see the retrenchment of the US from global treaties as being relevant. But they are representative of a wider issue – the US used to be the yardstick for others but in pulling out of climate change commitments, trade deals, and now the threat of pulling out of the WTO, it is inevitably going to affect the global balance. This could particularly be the case with trade at a time when the UK is looking for new trade deals in a post Brexit world.

Put it in to a different perspective – Football. Presumably the football fans in Birmingham and the Black Country were aware, but it possibly did not reach the general consciousness that at one stage in the last 5 years all four of the big clubs (Birmingham City, Wolverhampton Wanderers, Aston Villa and West Bromwich Albion) in the region were owned by Chinese companies or businessmen.

The English Premier League is now a microcosm of the new world trade order:

The same surely goes for trade – in order to be a leading trade nation we need to be forging partnerships around the globe, particularly from the fastest growing regions. Post Brexit, the headlines are being made by trying to agree a trade deal with the US; but that is the issue with headlines – they ignore the rest of the World.

In my career, I have travelled to China, to Kazakhstan, to Azerbaijan and in every place, I came away with distinct impressions of each. The sheer energy of China, the vastness of Kazakhstan, and the speed of growth in Azerbaijan. The energy industry has long recognised the importance of these areas. The ways of doing business are very, very different but perseverance is the only answer. I have come across some people who really know how it all works, and they are invaluable, people like David Valentine here in Angus, who has just announced a deal to build the first world class Whisky distillery in Mongolia, China.

Education is one of the great touchpoints, and the rise in the numbers of UK schools opening in the Far East, and the reciprocal growth in students coming the other way is something to be celebrated. Britain’s Universities rely on large numbers of students coming from the East. Trade missions and events looking eastwards are growing. And young entrepreneurs are getting in on the act – see the Sino-British Summit https://sinobritishsummit-en.org set up to encourage debate by four people who were still at University.

The China – Britain Business Council leads the way and the next few weeks see a number of virtual trade events online.

The latest news from the UK Government suggests that they are at least looking both ways. The Department for International Trade published their approaches to negotiations with Japan and the US this month. They have also just published the new UK Global Tariff.

So, perhaps we should all be looking at the present and future of the Silk Roads – an extended route that stretches from the gates of Europe to the South China Sea. It is possible that within a generation, all roads will lead East, and not just as a place to go to get manufacturing done cheaply.

It’s not to say that there aren’t fantastic opportunities in the US or Western Europe, there are. The benefits of rules-based business and ease of getting things done makes it all too easy to follow the comfortable route.

But the overwhelming message from Peter Frankopan is that we should not be ignoring what is happening as the new Silk Roads develop – they could provide the road map to a new world order with all of the concerns and opportunities that brings. I commend his book to you – definitely required reading. 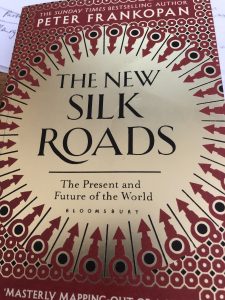